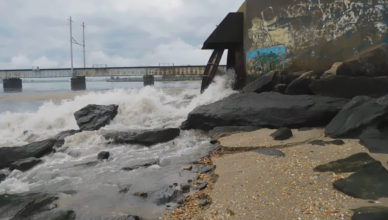 On Oct 1, 2020, the City of Perth Amboy must submit to the NJ DEP a plan to prevent the City’s raw sewage from being released into Raritan Bay during heavy rains. Currently the Perth Amboy combined sewer system dumps raw sewage into the bay (gross) during heavy rainfall. The CSO Long Term Control Plan addresses this pollution problem and will improve the water quality.

Clean water means swimmable beaches in Perth Amboy. It also means less local flooding. Perth Amboy is one of 21 NJ communities who must submit plans to the NJ DEP to address water pollution from combined sewers.

Perth Amboy hired engineering firm CDM Smith to develop the CSO plan. The firm developed a $500 million plan to address the sewer overflow over 20 years. The number of combined sewer overflow pipes that discharge into Raritan Bay is 16. it is estimated that over 61 times a year sewage is dumped into the bay by these pipes.

Waterfront Neighborhood Association Organizer Bienvenido Torres recommends that Perth Amboy seek grants to pay for the plan that will fix our sewers and clean our bay.

Raritan Riverkeeper Bill Shultz, also a Perth Amboy Civic Trustee, proposed to DEP to allow CDM Smith engineers to modify the south 3 acres of the Second St park development (near a main sewage outfall) to facilitate the future construction of an underground retention facility so Perth Amboy would be able to have storage for 300 million gallons of stormwater.

Things for the public to look for in the plan or to recommend. Green infrastructure, catching rainfall before it enters the CSO and reducing stormwater, is a method to address the combined sewer overflow and is generally less costly. Also, making sure that the plans do not include unsightly infrastructure in a neighborhood. The impact of climate change has increased the amount of rainfall, and we need to make sure that the plan considers this increase in stormwater. The plan should also consider how future development will impact our stormwater.

Public presentation of the plan is required before it is submitted Oct 1.